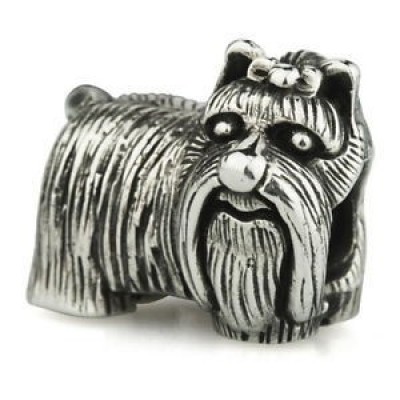 """The one absolutely unselfish friend that a man can have in this selfish world, the one that never deserts him and the one that never proves ungrateful or treacherous is his dog."" (George Graham Vest)
When considering our history with dogs, there's little wonder they've become known as man's best friend. In the past they've aided us with hunting, herding and transport of goods. Today they still act as guard dogs, police dogs and those entrusted with aiding the blind and handicapped. Perhaps more importantly to many of us, they're loyal companions who love unconditionally. Here at Ohm Beads we're true animal lovers and were keen to see this special relationship immortalized in jewelry. Rather than produce a generic doggy themed charm, we went one step further to produce a line dedicated to your favorite canine breed.
The Yorkshire Terrier, most commonly referred to as the Yorkie takes its name from the area in the UK from which it evolves. Originally used to catch rats in industrial clothing mills, its tiny size was distinctly advantageous. With its job as rat-catcher long behind, modern breed standards place emphasis on the beautiful silky coat. Despite a tiny stature, the Yorkie is known to be brave and outgoing, shunning the shyness associated with many toy breeds."