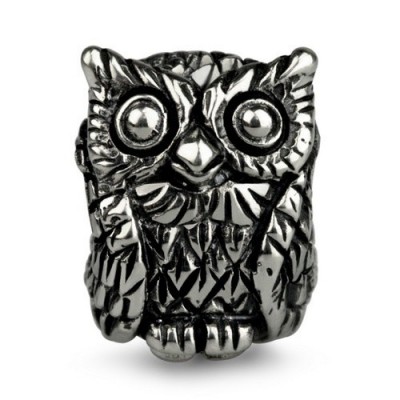 The owl is arguably one of the most beloved birds of prey. There is something undeniably endearing about their huge eyes and fluffy appearance, at least for those blessed enough to catch a rare glimpse of this nocturnal hunter.
In parts of Africa the owl is believed to be an omen of death due in part to it's haunting night time calls. In modern western culture by contrast, the owl is associated with wisdom. Symbology aside there is something both eerie and beautiful about listening to an owl calling in the darkness. For those honored to have a local owl resident they are rarely seen but often heard, like a ghostly presence in the night.
The Ohm Beads Owl is exquisitely detailed with the texture of his individual feathers encompassing the design. His characteristic wide eyes and pointed ears bring a smile to your face while even his tiny grasping talons are evident.
Regardless of whether you're an owl enthusiast, an animal lover or find your own personal meaning in this bead, he'll act as a watchful and silent guardian to yourbracelet.