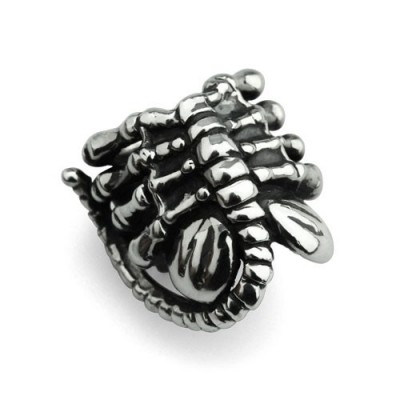 The facehugger is the second stage in the life cycle of a Xenomorph. Its bony finger-like legs allow it to crawl rapidly and its long tail can launch it in great distances.

The facehugger is a parasitoid; its only purpose is to make contact with the host's mouth for the implantation process, by gripping its long, bony finger-like legs around the victim's head and wrapping its tail around the host's neck, then slowly tightening the tail in order to make the host gasp for oxygen and be rendered unconscious. By this point, the facehugger will have inserted a tube-like proboscis into the mouth and down the throat of the host, supplying the host with oxygen while implanting an embryo. Attempts to remove facehuggers generally prove fatal—the parasite will squeeze the host's neck with its tail, while the facehugger's highly acidic blood deters cutting it off. Not only this, but its grip is so firm, peeling it off would result in tearing off the host's face. In Aliens, a number of facehuggers are observed in stasis and accompanying medical notes indicate that at least one of the human hosts died during removal. However, it is also seen in the same film that it is possible to remove the facehugger if it is grabbed before it can make contact with the subject's face, although it takes considerable strength to pull it away. Over time, a facehugger's outer epidermis becomes solidified and hardened by a chitinous layer of silicon. Once the alien embryo is safely implanted, the facehugger detaches and dies. Later, a larval Xenomorph, known as a Chestburster, will erupt from the host's chest.